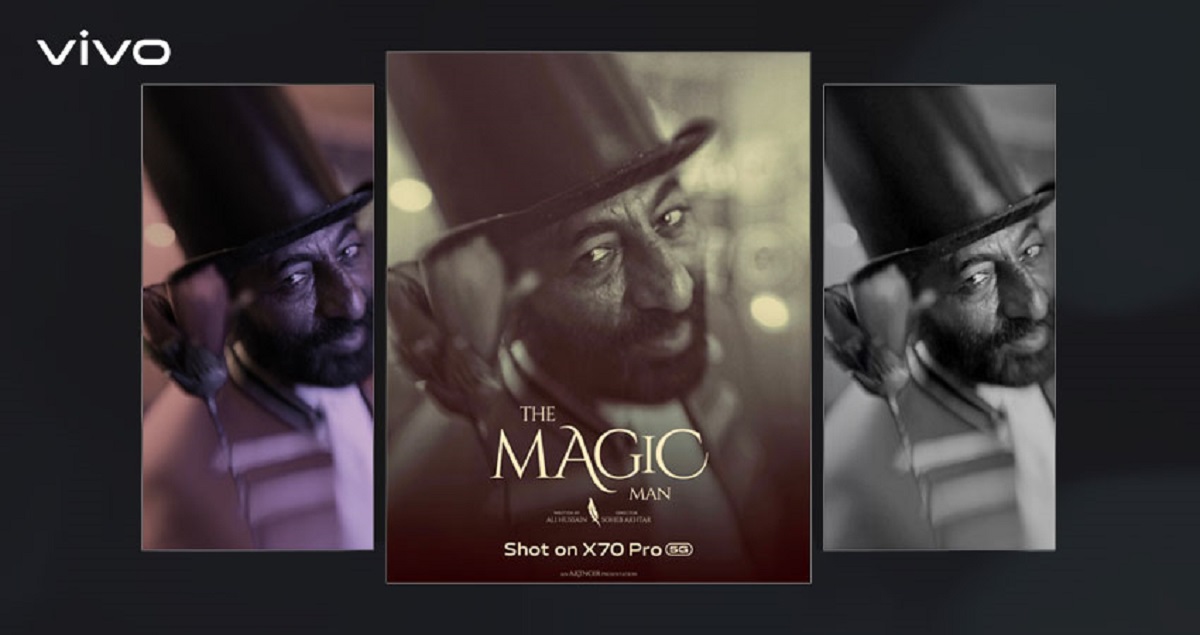 As a leading technology brand, vivo has strived to offer ground-breaking technology in smartphones that allow consumers to unleash their creative potential. The brand recently launched an all-rounder smartphone, the X70 Pro that incorporates a legendary camera co-engineered with ZEISS, a well-known manufacturer of optics and lenses.

To showcase X70 Pro’s capability, vivo collaborated with photographers and technology influencers to let them experience what the smartphone brings to the table. One such successful collaboration was with the renowned Pakistani director Soheb Akhtar.

Together with vivo X70 Pro, Soheb Akhtar created an extremely touching short film titled ‘The Magic Man’. He created this astonishing short film entirely on the X70 Pro using unique creative angles, made the best use of various shooting techniques like pan, dolly, tilt, and zoom and much more. When approached about the project, Soheb was highly impressed with the camera. He was eager to test the capabilities of the X70 Pro ZEISS T* Coating powered with vivo and ZEISS technology.

“With X70 Pro, we were wondering if it could clearly record an environment with complex light sources and under extremely dark environments but interestingly the X70 Pro successfully showcased its camera potential by shooting in conditions that will test even the best of phones. I personally liked X70 Pro’s ZEISS T* Coating which made it possible to shoot in low light conditions as it helps to enhance the transmission of visible light. The feature dramatically improves the camera performance in low light conditions to produce a more accurate shot as well as capture the scenario so well giving it an awe-inspiring frame while negating the unnecessary flares and ghosting to deliver Clarity and Perfection.

This Short Film is a wonderful piece of Art and Technology that features not just emotions from the actors but technicalities from the makers. While filming the scenes Soheb mentioned, “The X70 Pro’s performance while shooting this film was much beyond our expectations, as it handled low light and photography in motion admirably. The power behind it can be felt by the audience, thus it’s important to capture the actual feelings.”

To inspire future filmmakers and creative professionals, Soheb has gently but wonderfully incorporated novel approaches into the film. The Gimbal Stabilization 3.0 provides a focus like never seen before. The film shots appeared so steady and accurate that they can be mistaken for a tripod making it highly sought after by professionals. “Tap the main subject on the phone’s screen in order to lock the exposure and focus. This will help in avoiding focus jumping.” Additionally, Pro Cinematic Mode maximizes the control and adjustment of various parameters, making it possible to make professional videos comparable to cinematic standards.

The director believes that the Ultra Sensing Gimble Camera with Gimbal Stabilization 3.0 is a revolutionary camera technology that makes it possible for anyone to capture such shots. It stabilizes the image, reducing blurs caused by movements, making it a perfect shot. In the BTS of the film, the camera can be seen handheld while shooting, showcasing the stabilization effect in play. As this little film so eloquently illustrates, a single phone is sufficient.

See Also: Why Your Next Smartphone Should Be vivo X70 Pro— Hear from Fahad Hanif

Soheb intended to showcase the camera’s raw potential to the audience who is interested in videography or photography. Expressing his happiness over the film, he stated, “Photography is not only an art form for a chosen few, but also a recreational activity for all of us. With the X70 Pro in your hands, everything is possible, and every attempt can result in a fantastic film. It can help you achieve your goals.” The short film has garnered a lot of great feedback and has had a lot of popularity on Facebook and YouTube. It made consumers realise that they don’t need expensive tools or technology to express their creativity.

X70 Pro is the epitome of smartphone technology that features a revolutionary camera system through vivo’s research and the sheer experience of ZEISS. The camera features an Ultra Sensing Gimbal Camera, which is implemented through Vivo’s customisation of the Sony IMX766Vsensor. X70 Pro also comes with a 60X HyperZoom technology. It is a powerful smartphone that has turned the tables for camera technology in the smartphone market.