In terms of new features, WhatsApp recently released two new safety-related features: flash call and the ability to report a specific message. The flash call function validates a user’s phone number throughout the registration procedure with a call rather than only the OTP provided via SMS, giving an extra layer of protection to the account. Currently, the functionality is only accessible on Android smartphones.

WhatsApp’s UI differs between iPhone and Android. If you have a problem with the audio speed on your iPhone, the instructions below should help you solve it. Then, open WhatsApp on your iPhone. Open the chat where you wish to listen to the voice message. Finally, navigate to the received voice message. Press the Play button and look at the chat bubble to see what the current speed is. 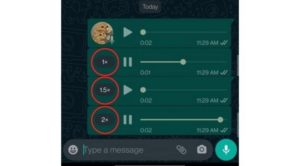 This is what they mean.

1x – 1x indicates that WhatsApp will play the audio message at regular speed.

2x – 2x indicates that WhatsApp will play the message twice as fast.

The method for increasing WhatsApp audio speed on Android stays the same. Because it employs a little different UI.

You may be also interested in: WhatsApp Finally Lets You Create Your own Stickers, but not on your Phone